Think on your feet is a commonly used expression in English. However it doesn’t have anything to do with feet! On this tip you’ll learn what think on your feet means and how to use it in the appropriate context.

Think on your feet means that one has to make a decision right at the moment – they don’t have time to think much about it beforehand. When someone thinks on their feet they are in a situation where they need to make a quick decision, usually because the previous plan did not work out.

I also have to say that think on your feet also relates to a person who has to come up with an answer without having time to think of a response. This may happen in the middle of a difficult situation, in a fight, or when someone is lying.

As you can see, this expression can have a positive connotation when it refers to an intelligent person that does not need a large amount of time to think of an alternative plan, however it can also be negative when it refers to someone who must create a fake story to cover a lie or a weak argument. 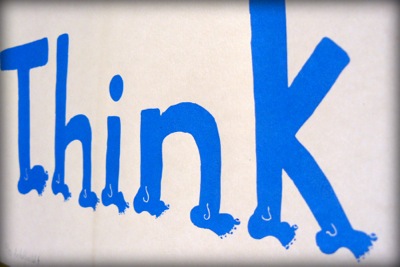 In Portuguese, you may say “pensar rápido”, “responder rápido”, “tomar uma decisão de pronto”, and a few other expressions which mean the same.

See some examples below:

The next time your plan doesn’t go as you had hoped, don’t get upset – use it as an opportunity to use this new expression!