“Might as well”, according to corpus research, is a common phrase in spoken English. So, you have to learn how to use correctly. On today’s tip we’re going to talk about this specific phrase: meaning, uses, and some possibilities to translate it into Portuguese. [Se você é um estudante iniciante, leia uma dica em português sobre o uso dessa expressão clicando aqui.]

If we look up “might as well” in a dictionary, we’ll learn that it’s also possible to say “might just as well” and, least common, “may as well”. What’s difference among them? None. There’s no difference at all. The word “just” is used only to add flavor to the phrase. The other one – “may as well” – is not very common in everyday language. So, don’t get too freaked out about them.

Dictionaries give two definitions of this phrase. The first one reads, “used to suggest doing something because you cannot think of anything better to do”. After thinking for a while, I realized that in Portuguese we express the same idea by saying “bem que poderia”, “bem que podia”, “o jeito é”, and other possible ways to convey the same idea. Take a look at the examples below: 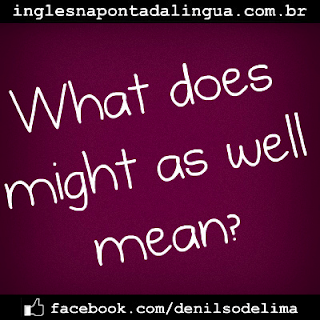 Let’s take a look now at the second definition which reads, “used for saying that it would not make any difference if you did something else”. Here we have a kind of “whatever situation”. That is, “tanto fez como tanto faz”. Whether you do A or B the result will make no difference. Again, we can translate it into “bem que podia” and similar phrases:

As you can see, the idea is too find phrases (or structures) in Portuguese which may mean almost the same thing or get close to the idea conveyed. Do not analyze this phrase word for word. Just understand the two definitions (uses, ideas) mentioned above and keep them in mind. Another important thing to be said is that it’s not that easy to translate “might as well”. Being that the case, do not to translate it:

Carl is asking Martha whether they should go to a movie theater so as to watch the first showing of a film. Martha has nothing else to do, so she thinks it’s a good idea. The translation can be something like that:

To put an end to this post, remember that understanding the idea behind this phrase is the best way to learn it. Do not try to find an exact translation into Portuguese, you may not always get one.I hope you’ve enjoyed this tip. In case you want to keep learning English in a fun way, like our fanpage on Facebook. Just go to Facebook.com/inglesnapontadalingua and hit like. Take care, you all.