Hello guys, this is another episode of our Inglês na Ponta da Língua podcast. Today, we’re going to have Kristen Hammer, who is an American living in Florianópolis, where she teaches English, reading her blog post on sounds for us. So, let’s listen to her.

This is Kristen Hammer, professora de ingles, and I’m going to read my blog entry about sounds.

Who knew sounds can take the place of words?

I thought I would write about this subject, which can be termed “interjections”, because I have had various problems with it since I moved to Brazil. This is a subject that no one has taught me, no one seems to talk about, and nothing is written in my culture or language books to help me cope. Sounds, noises, gestures, and all types of body language can be misinterpreted and make for a lot of confusion! 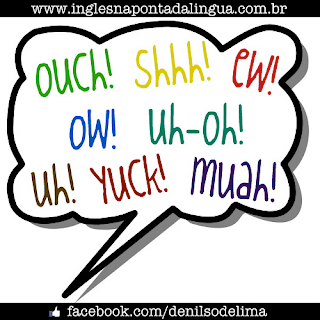 I was at a school recently, waiting for my meeting to start, and overheard one of the teachers giving a lesson in the room next door.  The topic was “the ten most often used words in English”. All was going well until he got to the word “UH.”  I thought it strange that this interjection was included in the list of common words.  I don’t know where he got this list, but anyway, the example he gave for the use of “uh” was this:

Person 1:  Do you know what I want for my birthday?

Now that is definitely not how we use “uh” in English. After a second, I realized what he meant: In Brazil, this is the sound you make when you want the person to continue with what they were saying. I think in Portuguese you spell it “hã”, but I’m not sure.

This made me think about other sounds and noises that we use in English that you might hear.

Number 01) UH:  This sound is made to express confusion or uncertainty. Example:

Person 1: What movie do you want to go see?

Person 2: Uh (long pause), I think Batman would be fun!

It is also a space filler or a kind of pause while speaking.  Example: To get to my house you go right on Town Street, uh, then make a left on Main Street, uh… then go down the street, and , uh, five houses down on the left is my house.

Number 02) UH-OH: This is used for the sound that people make when they realize that something has gone wrong. Example: (after getting to the airport) “Uh-oh!  I forgot my passport!”  Or  “Uh-oh!  I think I put salt instead of sugar in the recipe!”

Number 03) OW or OUCH: The sound you make when someone or something hurt you or you hurt yourself.  Example:  “Ouch!  You just stepped on my foot!”  Or  (after sticking yourself with a needle while sewing)  “Ow!” What’s funny is that several times I tried to speak a little English with my boyfriend, and used the word “I”(eu)  with him…he thought he hurt me because I said “AI” which is a sound Brazilians use to express this same idea!!

Number 04) SHH: This sound you make to tell someone to be quiet or to talk more softly.  Example:  “Shhhh, you guys are making too much noise and I can’t hear the TV”. What I hear people do here in Brazil to express this idea is a VERY offensive sound to us (Americans). It is your “Psiu” sound. Here, people use this sound to quiet someone down, or to call someone’s attention. But to us, it sounds like you are calling a dog. It’s very demeaning!

I had a big problem with the Brazilian “Psiu” when an old boyfriend of mine used it with me.  I had only been in Brazil for about 6 months and he didn’t speak any English. He began using it to get my attention at home and that was bad enough. But when he began using it in public, I got so nervous, angry, embarrassed, and plain pissed-off at how he could treat me so horribly in public!  But now I know it was a misunderstanding and is just a culture thing. Even so, I still cringe when it is used in my presence in public!

Number 05) YUCK or EW or EWW – We make this sound when something is gross. I am told that Americans, specifically American girls, express this sentiment all the time. Along with scrunching up our faces and making a big scene. I think here people use ECA or EKA to express the same thing.  Example: “I am NOT going to eat those shrimp that still have the heads and feet on them, YUCK!”. I, personally, tend to use the word “gross” to express this feeling. It is said more drawn out. Example:  “Grrrrroooooossse… I can’t believe he just ate that snake alive” (after watching Man vs. Wild)

Number 06) MUAH…this one I am putting in here because I have had several people ask what this means because it is used a lot in Facebook messages and comments.  Here people use the words “beijos” or “bjs” at the end of a comment. For us, we sometimes put XXOO or XOXO,  which is hugs and kisses… But many times we put Muah, or MUUAAAHHH.   it is a drawn out sound as if you were planting a big, huge kiss on your friend’s cheek or lips.  But here, in Brazil, I notice that kisses are much shorter, so they don’t make the same sound. Again, it’s MUUUUUAAAHH.