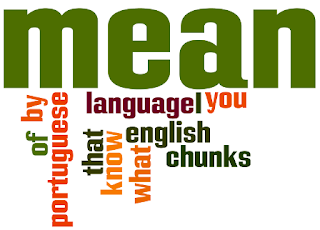 Since ‘mean’ has more meanings as a verb than as an adjective and a noun, it’s clear that you have to focus on the uses of it as a verb. However, I don’t recommend you memorize the meanings and uses in a mechanical way. I mean, it’s not a good idea to have a list of meanings ans stuff like that. Actually, the best thing to do is learn how ‘mean’ is used in the real world.

The tip is: learn some common chunks with the word ‘mean’. Doing so, you’ll learn how the word is put into practice. You’ll also learn how those common chunks are pronounced and structured. An example of a chunk with ‘mean’ is ‘mean nothing to somebody’ [‘não representar nada pra alguém’ or ‘não significar nada pra alguém’]. Look at some examples taken from a spoken corpus of American English language:

Another common chunk with ‘mean’ is ‘mean a lot to somebody’ [‘significar muito pra alguém’]:

Also learn the chunk ‘know what I mean?’ which is usually used to check if someone understands what you say:

There are much more chunks [phrases] with ‘mean’. Unfortunately, I can’t write all of them here. To get to know the uses of ‘mean’ you’d better have a good dictionary and keep your eyes wide open to notice the word ‘mean’ in action. You’ll certainly learn more than you can imagine. Have fun learning English lexically, you deserve it!