Before talking about today’s tip I want to thank all of you guys who are giving ideas to make our podcasts better and better. I am sure this is a fantastic way to help you guys improve your English language skills. Remember that you can download the MP3 and PDF files for the podcasts on www.inglesnapontadalingua.com.br. 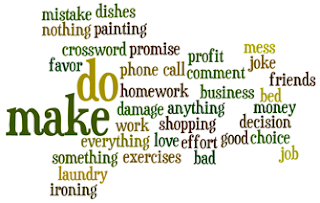 Today, I want to tell you about the words “make” and “do”. In Portuguese, they both can be translated as “fazer”. Of course, there are other meanings, but people in Brazil usually think that “fazer” is the only option. Because of this, it’s common to get confused about using one word or the other. That is, in Brazil, we usually say “fazer um acordo”. So, English language learners get stuck and keeps asking if they should use “make” or “do” in this combination. In other words, should they say “make an agreement” or “do an agreement”?

English language learners and teachers tend to focus on the words “make” and “do”. In my opinion, this is a huge mistake. I believe the focus should be on the other words. For example, imagine you want to say “fazer uma reclamação” in English. Instead of asking about “make” or “do”, you should focus on the word “complaint”. That means you have to look up the word “complaint” in a dictionary and see what is used in there. If you have a very good dictionary, you’ll learn that in English they say “make a complaint”.

Keep this in mind: Always focus on the other word. Do not worry about “make” or “do”. Let me give you another example. You have to say “fazer a tarefa de casa”. You know that “tarefa de casa” in English is “homework”. So, what you have to do is get a good dictionary, look up the word “homework” in it, and find out that in English they say “do the homework”. See? What you have to do is to focus on the other word. If you focus on “make” or “do”, you’ll never learn how to combine the words properly in English.

My point here is: there are no rules to help you with that. It’s the way words are naturally combined that will help you learn when you use “make” or “do”. Some people try to create rules for this. One of these crazy rules says that if the think is created, manufactured, etc., you have to use “make”. According to this rule, you say “make dinner” (fazer o jantar), “make a cake” (fazer um bolo), “make a salad” (fazer uma salada), etc. When it comes to the word “do”, they say that “do” has to be used to describe an activity: “do the dishes” (lavar a louça), “do a translation”(fazer uma tradução), “do exercises” (fazer exercícios).

In a nutshell, always focus on the other word to be used with “make” or “do”. There are no magic rules. There are no magic tips. There is no magic at all. Noticing how words combine is the only thing which will really help you. That’s what’s going to make the whole difference.

That’s all for today. Have a nice day, guys. Take care!